TeachingBooks.net is delighted to welcome author Jason Reynolds as our featured guest blogger this month. 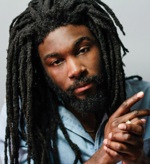 When I was growing up, I’d hear my mother talk to her sister in a language all their own. While shaking ice cubes in glasses, cigarette smoke lingering just above their heads, I’d sit off to the side and listen as they reminisced about their upbringing, first in the South, then in Washington, DC.

“‘Member Mama n’em use to say, ‘Yenna chirren, gwine get up off that porch and hep me thrash these peas,’” my mother would say.

“Ooooooh, lawd,” my aunt would howl, then continue. “And when we’d finish with the peas, Mama be done fix up some strick-a-lean or some souse and we’d be smackin’ on it and livin’ in hog heaven.”

“Ain’t that the lawd’s truth.”

I’d take it all in, digesting these words, this language, these codes and sounds sloshing around in my head, mixing with the language of my older brother and what I’d hear him saying outside with his friends, also a language all their own.

“Yo, you heard Chris snatched a dookie rope off a hype?” my brother would say to his friend, Kevin.

“Youse a lie. You always be talkin’ that yang.”

“No I ain’t. Straight flashed on him, yapped a dookie and a nugget ring.”

The only major difference between my mother’s and my brother’s way of speaking, is time. Generation. But it’s all informed by culture. This is the language that has always felt natural to me. The language I grew up hearing and speaking. A language all my own.

But teachers said I wasn’t allowed to have it. Or at least, I wasn’t allowed to use it. It was called improper, incorrect, ignorant, and some other words I refuse to type, rooted in prejudice and ugly biases that, in this case, existed more due to the discomfort of not understanding or wanting to understand the tradition these words — my words — are tethered to. So my relationship with language grew dissonant because my language was, apparently, “broken,” though it felt so whole.

What if my teachers had explained dialect to me? What if they would’ve explained voice, and how each of us has one, informed by our experiences and cultures, all valuable and capable of coexisting? What if, when teaching Shakespeare, I was instructed to translate it into “standard” english, and then into my own, not only to validate my interpretation of language, my voice, but to also better understand Shakespeare’s style and to better comprehend the story? What a powerful lesson that would’ve been, especially since it took me years after matriculating through the educational system to be okay with writing in my own voice — a voice all mine that school somehow convinced me I needed permission to access. The voice of my community, the voice of my family, and, funny enough, the voice that would change my life.

Just something to think about. That’s all.

Listen to the story behind The Boy in the Black Suit.

Hear about the inspiration for As Brave as You.

Text and images are courtesy of Jason Reynolds and may not be used without his express written consent.