TeachingBooks.net is delighted to welcome author Erin Bow as our featured guest blogger this month. 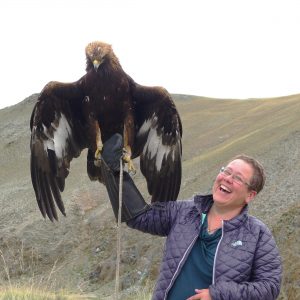 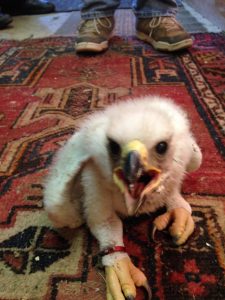 Murder Fluff. Cute, and wants to kill you.

I would like to introduce you to a week-old baby golden eagle of my acquaintance.  I call him Murder Fluff.

I met the eaglet just after he hatched at the Golden Creek Bird Farm in northern Ontario, near where I live. I was early in the process of writing my book Stand on the Sky (HMH, 2019). It’s a story about a girl named Aisulu, who rescues and trains a golden eagle named Toktar.  Meeting Murder Fluff helped bring the book to life. But for more mature eagles, I needed to go farther afield.

I have been fascinated with falconry–the art of hunting using falcons, hawks, owls, and eagles—my whole life. In fact, I spent about 10 years attempting to write a book about a boy and a hawk, but it never quite worked.  Then, in April 2014, I saw Asher Svidensky’s photographs of young people in Mongolia training in the ancient art of eagle hunting, and all of a sudden, my boy with a hawk became a girl with an eagle, and my story woke up and took flight.

Chasing the story, I ended up spending the summer of 2015 living with a family of Kazakh nomads–and their two eagles. 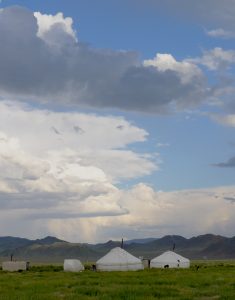 Alimbai and his family live in Banyan Olgii, the westernmost province of Mongolia, between the Gobi desert and the Altai Mountains, near the border of Kazakhstan and Siberian Russia.  Like most Mongolian Kazakhs, they’re nomadic herders: they have a handful of cows and yaks, and a mixed herd of 350 goats and sheep. They live in gers (round tents) and move several times a year seeking new grazing ground for their animals. It’s a gorgeous country.

I wanted to write about a Kazakh girl, so I asked my host family to treat me like one—instead of as an honored visitor. While the boys and the men rode out with the herd, I worked alongside eight-year-old Kumsai and 12-year-old Ayrekai, cleaning, hauling water, and gathering yak dung for the fire. I made butter and cheese. I tried to milk animals. (If you want to try, I have two tips. First, do not start with yaks. Second, make sure none of the goats you attempt to milk is a male.) 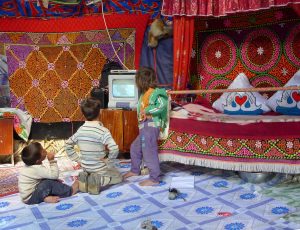 Children watching TV inside the Gers

Despite my failures (I once screwed up gathering yak dung, so the failures were many and memorable), I was allowed to do something that only a handful of Kazakh girls have an opportunity to do: learn about handling eagles. Hunting in partnership with these magnificent creatures is an ancient tradition for the Kazakhs; they have been doing it for thousands of years.

Though there have always been female eagle hunters, the tradition has been passed from father to son. In recent years, that’s begun to change, with a scattering of Kazakh girls and women taking up the path of the eagle hunters, the burkitshi. The young hero of my book, Aisulu, is one of these girls. 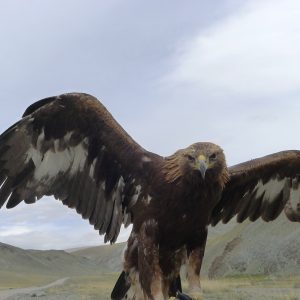 The most amazing thing I learned about eagles is how fast they grow. Remember Murder Fluff?  Toktar, the eaglet in Stand on the Sky, was orphaned at about the same age as Murder, but usually, Kazakh eagle hunters wait another 10 weeks or so before taking eaglets from their nests. Here is Alimbai’s newly captured baby eagle. Remember, she is only a few weeks older than Murder Fluff.

Because they grow so fast, infant eagles eat a lot–and the funniest thing I learned about eagles is how much and how far they poop.  Even a tiny baby eagle like Murder Fluff can shoot poop backward a good eight feet, with the force of a squirt gun. Needless to say, Stand on the Sky is full of poop jokes.

But everything I learned about eagles was awe-inspiring. I watched Alimbai’s baby eagle grow into her wings, discover the feeling of the wind, and finally, learn to fly.  I was there when she made her first kill– just a rabbit on the end of a rope, but it was a lightning-bolt intense moment, the kind that flashes into your memory and stays forever.

Gers under a mound of cloud

And look at this.  You can actually see my heart rising out of my body–the moment I learned to stand on the sky.

All Mongolian photos are by my friend and traveling companion Seánan Forbes, who is a photographer, writer, creative coach, and teaching artist.

Text and images are courtesy of Erin Bow and may not be used without her expressed written consent.