TeachingBooks.net is delighted to welcome author Eliot Schrefer as our featured guest blogger this month. 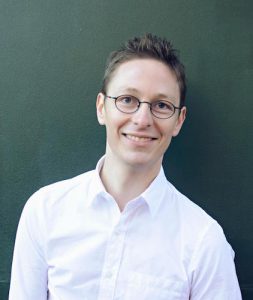 The Value of Talking Animals

Princess Panther talked to me. She really did!

When I was a kid, I was obsessed with stuffed animals. I had 40 or 50 of them, enough to sag a bookshelf. They didn’t quite have distinct personalities, but in my mind Mrs. Lion, Mr. Hawk, and Princess Panther were brimming with life. While I was at school, I’d imagine them back at home playing cards, rummaging through my drawers, fighting over who got to sit on the best bed pillow.

I knew my stuffed animals weren’t really alive, but I was convinced they had internal lives. Magical thinking comes easily to eight-year-olds. After all, the contradiction embodied in these creatures was also true for the animals in the books that I loved: Beatrix Potter’s Jemima Puddle-Duck, Beverly Cleary’s The Mouse and the Motorcycle, and Stan and Jan Berenstain’s “Berenstain Bears.” They weren’t real, but they were. Nothing weird about that!

Lately, I’ve been thinking a lot about how kids think about animals. I’ve just finished the last book in my “Great Ape Quartet,” Orphaned (Scholastic, Fall, 2018). Apes are central characters in these books, but I’ve tried to keep them realistically apes. They don’t wear peacoats or overalls; they don’t dialogue or tend to tidy little ape gardens.

From the quartet, I turned to The Lost Rainforest: Mez’s Magic (HarperCollins 2018). That book is for a slightly younger age group and approaches character in an entirely different way—much closer to the way the animal books I read as a kid did. These animals, fighting to protect their rainforest, have magical powers and banter. I gave Mez, a panther, panther qualities, but I give her human ones, too.

Scientists consider falsely investing animals with human qualities anthropomorphism, but little is written about the dangers of underinvesting them with human qualities. Claiming that it’s intellectually soft to give animals feelings or consciousness is an easy way to let ourselves off the hook for doing what we like to them and to their environment. In the context of the disregard of their need for protection, what primatologist Frans de Waal has termed anthropodenial, the magical thinking that talking animal stories induces in kids is important and useful. I’ve seen the effect animal protagonists have on kids. They increase wonder. They increase empathy. These are qualities that need nurturing in today’s world.

I traveled to the Peruvian Amazon to research The Lost Rainforest: Mez’s Magic, and while there I encountered the real-world animals that the characters of the novel were modeled on. While the tree frog I came across wasn’t a philosophical scholar like Rumi, there was a yearning and contemplative quality to his lonely chirping for a mate. The capuchin monkeys I saw didn’t prattle on in conversation like Gogi, but their constant grooming demonstrated their need to keep peace. And while the bats that lived in my cabin wall didn’t have the magical healing powers of Lima, I could see how closely they cuddled through the day, how connected they were with one another. And it’s true the panthers I caught a glimpse of didn’t have powers of invisibility like Mez, but they definitely tried to thwart my attempts to spot them!

Talking to fourth and fifth graders, I see that there’s a part of them that knows that animals don’t really speak to one another, that they aren’t secretly humans in costume, but there’s also another part of them that believes it to be true. This dissonance is no problem—in fact, I think it’s one of the beauties of middle grade literature. The same kids who fall in love with a magical monkey will be the ones to write passionate petitions to prevent illegal rainforest logging. When it settles in early, love for marvelous other beings settles in to stay—and in its early forms can land as easily on a stuffed panther as on a live one in the deep jungle.

Find lots of resources about Eliot Schrefer and his books!

Text and images are courtesy of Eliot Schrefer and may not be used without his express written consent.