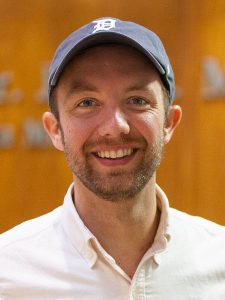 Capping off the Hat Trilogy

I Want My Hat Back

Writing books is a very mysterious thing. At least it is for me. I’ve always enjoyed writing, maybe just as much as I’ve enjoyed drawing, but drawings are easier to gauge. When you create a drawing you like, you can look at it and immediately see the reasons why, and you can show it to other people and they can point to things that they like about it, too. But when I come to the end of a story, either mine or somebody else’s, my feelings are a little murkier. I usually know whether I *liked* the story, or not, but understanding the specifics of why is much harder. It’s not like a drawing that you can point to and say “that tree looks out of place” or “his foot is bending at a strange angle.” Stories move—they’re fluid, breathing things. It’s harder for me to pin down why I appreciate a story, because it is always on its way to somewhere, or at least it ought to be. All this is to say that when a story DOES work, when you DO like it, it is very special and mysterious. Often, authors themselves don’t know quite what they did right. They just know that they like it, too. It’s a lucky feeling. I’m fortunate that the two hat-themed books I created before We Found a Hat (Candlewick 2016) made me feel this way. 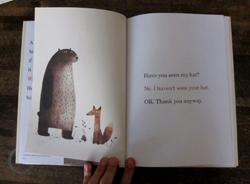 Searching for a hat.

For reasons that are unknown to me, I’ve always wanted there to be three hat books. It’s a nice number, I guess. The first one, I Want My Hat Back (Candlewick 2011), was finished a long time ago now, and This Is Not My Hat (Candlewick 2012) wasn’t too far behind it. The first one is about a bear whose hat was taken from him. This Is Not My Hat was in many ways its opposite: it’s about a fish who had just stolen a hat. 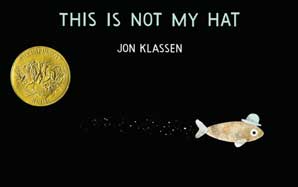 This is Not My Hat

This was my problem. Characters stealing hats and meeting bad ends because of it—surely that point had been made. The only thing I could think of was that the next book, if there was to be one, should end with nobody getting the hat in question. I couldn’t say why that was an attractive idea, but I liked the quietness of it.

For a long time, I thought that it meant that this last book had to be the bloodiest of the three. One idea I had was that the three characters would find a hat in the snow and a standoff would occur; each would wait for the others to leave until they were all buried in falling snow, and the book ended on an all-white spread.

Test piece for an earlier version of We Found A Hat

We Found a Hat

What I found out was that the story could not work if everybody died. I decided to start over with two characters who like each other. They find a hat at the same time and decide after each trying it on that there is no fair way to decide who should have it. I didn’t really know how I wanted this story to end, but, importantly, I started to really believe in the two turtles and their problem. (The other versions of this book had been about groups of scoundrels.)

I would argue that the stakes in We Found a Hat are higher because it is about a relationship rather than strangers trying (and failing) to behave. The ending feels like the one I wanted. It feels quiet. In some ways it’s a happy ending, and in other ways, a sad one, but that is fitting for this book, I believe. It’s why the cover is a gradient of tones instead of a solid color. It could be the relief of having finally produced a book to end the self-imposed set of three, but right now I think it is the one I’m proudest of, because it is mysterious how it happened—and nobody had to die!

I Want My Hat Back

This is Not My Hat

We Found a Hat

Text and images are courtesy of Jon Klassen and may not be used without his express written consent.