The Princess and the Warrior: Honoring the Past, Looking Towards the Future

After creating three nonfiction books—Diego Rivera (2011), Separate Is Never Equal (2014), and Funny Bones (2015, all Abrams)—my editor and I both thought a fiction project might be interesting. We brainstormed and a suggestion that bubbled up was to take a well-known story, such as a fairy tale, and give it a twist.

I liked that idea, and the challenge, and immersed myself in tales by Charles Perrault and the Brothers Grimm, Aesop’s Fables, The Arabian Nights, and books on mythology. I tried writing my own versions of “Puss and Boots” and “Hansel and Gretel,” adding and changing some details: Puss wore sneakers instead of boots, Hansel became Juan. But my versions felt forced and awkward. 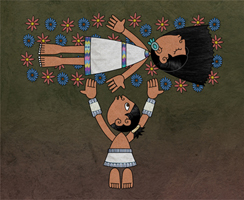 Next, I tried re-imagining “Sleeping Beauty” and while I was working on that something clicked. I remembered the story of “The Sleeping Woman,” or “La Mujer Durmiente,” that I had read in books when I was growing up in Mexico. La Mujer Durmiente is actually a volcano in central Mexico whose silhouette resembles that of a woman lying down, covered in snow. 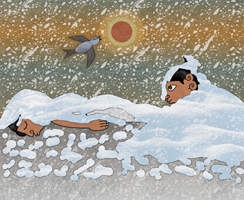 There are different versions of the legend but they all involve a pre-Columbian princess and a warrior who fall in love. The warrior promises the princess that—no matter what—he will always stay by her side. When tragedy ensues and the princess falls into a slumber from which she can’t awaken, her lover carries her to the top of hill, lays her down, and, true to his word, remains by her side. In time, the two become volcanoes: Iztaccíhuatl, the sleeping woman, and Popocatépetl, the smoky mountain. Today, visitors can see the volcanoes, which loom outside Mexico City. Iztaccíhuatl is dormant, but Popocatépetl spews ashes and smoke from time to time—it’s as if the warrior within is still trying to awaken his beloved princess. 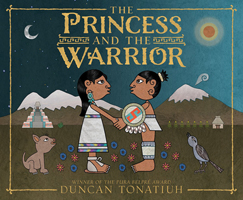 There is no original text for the legend. The story is hundreds of years old, passed orally from generation to generation. The Princess and the Warrior (Abrams 2016) is my version. I added some twists and details that I thought would make it more appealing to young readers. My illustration style, inspired by pre-Columbian art, was an ideal fit for the project.

Looking back, I’m a bit surprised—disappointed, even—that my first instinct was to reimagine a classic European tale rather than showcase a story from my native Mexico; I’ve tried in my other books to honor that past through my art. I am interested in creating books in which children of diverse backgrounds, especially Latino and Mexican American children, can see themselves and be proud of their rich culture and heritage. I hope The Princess and the Warrior will introduce a new generation of readers to this legend while accomplishing just that.

Listen to Duncan Tonatiuh discuss the inspiration behind The Princess and the Warrior.

See all available resources about The Princess and the Warrior.

Text and images are courtesy of Duncan Tonatiuh and may not be used without his express written consent.