Each month, TeachingBooks.net invites a distinguished author or illustrator to write an original post that reveals insights about their process and craft. We are delighted to welcome a talented team as our guest bloggers! 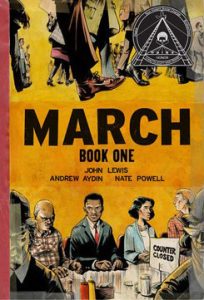 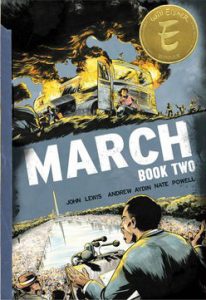 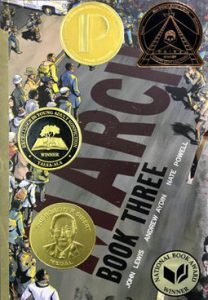 John Lewis, along with Andrew Aydin and Nate Powell, created three graphic novels chronicling his life and work in the Civil Rights Movement. Below, Aydin and Powell, the coauthor and illustrator of the March trilogy, discuss the inception of Congressman John Lewis’s acclaimed graphic memoir.

ANDREW AYDIN: The whole thing started in 2008, when I was working as Congressman John Lewis’s press secretary during his primary campaign.

Some of the staff members were teasing me because I mentioned that I’d be going to a comic convention after the campaign was over. But Congressman Lewis turned and said, “You know, there was a comic book during the Civil Rights Movement. It was very influential.” With that, I was hooked.

I learned about the booklet “Martin Luther King and the Montgomery Story” (Fellowship of Reconciliation, 1957), which told the story of the Montgomery Bus Boycotts, Dr. King, and Mahatma Gandhi. I discovered that it had inspired some of the earliest student actions of the movement.

I began asking Congressman Lewis, “Why don’t you write a comic book?” He took part in so many seminal events of the Civil Rights Era; if a 16-page comic about boycotts could inspire young people once, surely telling more of the story in the same format might have an impact today. Finally, one day, he said, “Okay, let’s do it—but only if you write it with me.”

AYDIN: When we began the writing process, I would interview Congressman Lewis, and then transcribe the tapes. His words, combined with some background research, and a basic story framework, became our script.

The congressman and I worked late at night and on weekends, just talking through the story. When we sent the script to Nate, he laid it out in thumbnail images, finding the visual cues that exist between the written words. As an experienced graphic novelist, Nate also provided input on pacing, so the reading experience would be smooth and complete.

NATE POWELL: Alongside the storytelling aspect of drawing March: Book One (Top Shelf Productions, 2013), one of my other major responsibilities was ensuring the historical accuracy of the visuals—to keep readers in the appropriate time period.

I searched Google Images for likenesses of specific people, but also (and sometimes more importantly) for the look of a certain year’s styles, technology, automobiles, and city streets.

I also made use of 1960s’ fashion illustrations, photography books focused on the era, DVDs, and video clips featuring actual news footage, as well as rifling through the pages of John Lewis’s memoir Walking with the Wind (Simon & Schuster, 1998) in search of any incidental details, which, while they might not have served plot directly, provided rich glimpses into his surroundings and life at the time.

In an effort not to be tied too tightly to a single, inflexible visual perspective on the American South, I also drew on my own memories of growing up in Alabama, Mississippi, and Arkansas in the 1980s, and asked my parents about certain environmental details of life in Mississippi in the 1950s—the same questions I asked Congressman Lewis.

POWELL: One of the greatest challenges in drawing the book was finding the balance between creating an accurate, responsible depiction of historical figures and events, and allowing enough room for more intuitive, expressive, and emotional storytelling.

I usually don’t feel anxiety when tackling historical figures, but some can deliver a high-pressure drawing experience! The first time I had to draw Dr. Martin Luther King, Jr. for March, I was stunned by the truth of the expression “less is more.” Not only is Dr. King’s face one of the most recognizable in history, it’s visually so simple, smooth, and iconic, that any unnecessary lines added to his visage ruined the likeness.

In such cases, I did study sketches to find the line work that best captured the person, and then tried to reference my drawings instead of photographs. Black-and-white line art is, after all, abstracted shorthand, and comics sometimes work best when following the code each artist has worked out for his or her story’s content.

POWELL: When drawing the cover, I worked very closely with our designer Chris Ross, and sent rough sketches of our ideas back and forth to John Lewis, Andrew, and our editors, so we could build something powerful and descriptive, while remaining true to our storytelling and its compositional needs.

Chris and I liked the idea of having the cover divided into two opposing elements, arranged with text and composition consistent with the late 1950s’ art. The colors and general feel of the cover were a nod to “Martin Luther King and the Montgomery Story,” and we gave it a worn look, as if it were the kind of outdated, hand-me-down book that John Lewis might have had to use in the segregated classrooms he sat in.

ANDREW AYDIN: As far as the final result, the first important opinion was that of Congressman Lewis, and we’re very honored that he found it both moving and powerful. Then we sent it out into the world…and all three of us have been a little blown away by the response. The reviews, the media coverage, and the feedback from teachers and librarians have all been amazing. We can’t wait to share Book Two with you when it’s ready.

This material may not be used without the express written consent of Andrew Aydin and Nate Powell. All images courtesy of Top Shelf Productions.