Each month we feature free and fun book contests and giveaways. We hope you will enjoy the following opportunities as well as the author and book resources available via TeachingBooks.net.

Win a free copy of The Boo-Boos that Changed the World: A True Story About an Accidental Invention (Really!)! (Elementary)

This funny picture book tells the true story behind one of the world’s most recognized products—the Band-Aid! In the 1920s, Earle Dickson needed to come up with something to help his accident-prone wife bandage the cuts and burns she kept getting in the kitchen. Although slow to catch on at first, this little strip changed the course of boo-boo history!

Charlesbridge is giving away 20 copies of The Boo-Boos that Changed the World. To enter to win, fill out this form.

Let your students design their own Band-Aids and more with the Discussion and Activity Guide for The Boo-Boos that Changed the World! 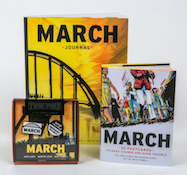 This month marks the 53rd anniversary of Bloody Sunday, when John Lewis led six hundred marchers in Selma across the Edmund Pettus Bridge in an effort to bring more attention to black voting rights.  Chronicle Books has created a beautiful journal and set of 30 postcards as well as a twin pin set to help readers bring the message from his powerful graphic novel memoirs into their own daily lives!

Chronicle Books is giving away three sets, each containing March Twin Pins, a March Journal, and March: 30 Postcards to Make Change and Good Trouble.  To enter to win, fill out this form.

Hear John Lewis discuss his books with the Meet-the-Author Book Reading for March and then get involved with the Letter Writing Kit!

What if your science experiments were so interesting that even an emperor wanted to know more? Read the fascinating story of the Father of Acoustics, Ernst Chladni and his meeting with Emperor Napoleon Bonaparte. Sound experiments never sounded so good!

Mims House is giving away three copies of CLANG! Ernst Chladni’s Sound Experiments.  To enter to win, fill out this form

Make some noise with the Teacher’s Guide for CLANG!

Win a free copy of A Real Live Pet! from the Science Solves It! series. (Elementary)

JJ’s little sister, Nala, loves the pet stick she found on the ground. But JJ wants a real pet for his birthday. So when he catches a frog at the pond, he’ll do anything to keep it—but will his parents let him? (Science topic: Living vs. Nonliving Things) With over 500,000 books sold, Kane Press’s popular Science Solves It! series merges fiction and science in storylines that intrigue youngsters and encourage them to observe, investigate, predict, and experiment! Each book includes a “THINK LIKE A SCIENTIST” page with reading comprehension questions and a hands-on activity.

Kane Press is giving away five paperback copies of A Real Live Pet! To enter, send an email to info@kanepress.com with the subject line: “TeachingBooks A Real Live Pet”. Please be sure to include your mailing address.

Get your students involved with the A Real Live Pet! Activity Page!

Picture Book Science presents real-world examples of physical science and engineering topics kids find fascinating! These nonfiction picture books consist of engaging narratives paired with brightly colored, whimsical illustrations drawn by an accomplished scientist. With these books, readers ages five to eight are encouraged to expand their definitions of the words “force,” “matter,” “energy,” and “wave.” Elementary-aged children are equipped to recognize basic science concepts and identify the different ways they are demonstrated in real life, while being impressed with the idea that science is a constant part of our lives and not limited to classrooms and laboratories.

Nomad Press is giving away six sets of Picture Book Science titles (Waves, Energy, Matter, and Force). Please email sean@nomadpress.net and include your physical address, the grade level or age group of the students you work with, as well as the school where you work.

Win a copy of Uncle Shawn and Bill and the Almost Entirely Unplanned Adventure! (Middle Grade)

Badger Bill needs rescuing. He’s been kidnapped by two nasty sisters who are about to make him fight a boxing match against three even nastier dogs. The four most depressed llamas in the history of llamas need rescuing too. They are about to be turned into llama pies. But never fear – Uncle Shawn is here! He loves rescuing things. He has a rescuing plan, which involves dancing, and a mole, and an electric fence. What could possibly go wrong? The first book in a hilarious, vividly imagined series for children from award-winning novelist, stand-up comic, academic, former clown and now children’s book author A.L. Kennedy, illustrated by Gemma Correll.

Kane Miller Books is giving away ten paperback copies of this recently released surreal, Dahlesque novel. To enter, please send an email to lynn@kanemiller.com with the subject line “Uncle Shawn.” Please include your mailing address.

Get your students involved in the story with the Activities and Discussion Guide for Uncle Shawn and Bill and the Almost Entirely Unplanned Adventure!

Win a free copy of What Happens Next! (Elementary)

What Happens Next is a raw, realistic story told by an unnamed protagonist who is made to feel different from everybody else—even invisible sometimes. Bullied by a girl at school, our narrator gives a terse script of the related facts (What Her Friends Do: Laugh. What Everyone Else Does: Nothing.) and emotions (How I Feel Sometimes: Bad. Really Bad.). The narrator takes these hurt feelings home, where Mom listens and offers some ideas. At school the next day, the child confronts the bully by turning a “weirdo” fascination with science into an opportunity to find common ground, and maybe help the bully see the world in a new way. Spare illustrations in a limited palette of blues and greens convey feeling alone even in the hustle and bustle of a crowded schoolyard. Graphic novel–style panels set a steady pace for the emotional impact of this important story that doesn’t simplify the realities of feeling like an outsider. It’s a powerful starting point for discussions of emotions, empathy, and how we relate to others.

Owlkids Books is giving away five copies of What Happens Next. To enter to win, send an email to chloe.brouitt@owlkids.com with the subject line “What Happens Next Giveaway” and include your mailing address.

Explore bullying and what to do about it with your students using the What Happens Next Discussion Guide!

Win a copy of Washington, D.C.: Our Nation’s Capital from A–Z! (Elementary)

Washington, D.C. is filled with treasures and it’s also brimming with history. Humorous cartoons accompany this amusing and informative look at the U.S. capital, its institutions, traditions, and eccentricities. It is filled with intriguing details about important landmarks and the people who have come to the capital to run the nation’s business, celebrate, protest, live in the thick of it all, or just visit. From the aluminum tip of the towering Washington Monument to the marble bathtubs in the Capitol Building’s basement, this book offers a top to bottom look at Washington, D.C. and its eclectic history. The book’s endpapers feature a map of the District.

Holiday House is giving away five copies of the nonfiction picture book Washington, D.C.: Our Nation’s Capital from A–Z. To enter to win, fill out this form.

Find new insights on the book in the interview with author Alan Schroeder!

Enter for the chance to win a copy of Honor Code! (High School)

Sam is finally part of elite Edwards Academy and wants nothing more than to fit in. But when she learns the high cost of entry, will she bury the worst night of her life in order to keep the “community sacred”? Booklist called this YA novel “social-media savvy [and] a must-read.”

Lerner Publishing Group is giving away five copies of Honor Code. To enter to win, fill out this form.

Get your students talking with the questions from the Honor Code Discussion Guide!

Win a set of the First Touch Soccer series! (Elementary)

First Touch Soccer provides budding fans with an organized and informative gateway to the most dynamic teams and players in the world’s most popular sport. From club history and culture to fierce rivalries and world-class competitions, each book focuses on an individual team, tying it to its city and country–and giving readers a taste of what it’s like to be a high-energy super fan.

Norwood House Press is giving away two sets of the new First Touch Soccer series titles (12 books). Please email info@norwoodhousepress.com with your shipping address to be entered into the contest.

For passionate fans, each First Touch Soccer book has its own webpage for team updates, news, and more team history!

Enter for a chance to win a free Classroom Set of Rain, Reign! (Middle Grade)

Enter for a chance to win a classroom set of Ann M. Martin’s Rain, Reign, now in paperback! This New York Times-bestselling middle grade novel is about a girl, her dog, and the trials of growing up in a complicated and often scary world.

Macmillan Children’s Publishing Group is giving away a classroom set (25) copies of the paperback of Rain, Reign. To enter to win, fill out this form.